My mom brought up an interesting problem that I’ve never thought of.  She has two shoe boxes full of pictures and a few boxes crammed with mementos from when I was growing up.  I know this isn’t that bad considering I’m an only kid, so the amount of stuff is limited.  Also, they live in a ~3,000 sq ft ranch house with a half finished/unfinished basement, so there’s plenty of room.  But, her point is that she has these boxes of things that she has absolutely no plan for.  The only purpose they provide is to give her and my dad a work out when they have to move them every couple of years to get to something else.

I am starting to run into a similar problem, except in the digital era and with video.  I have 142 GB of videos on my computer captured from the last 2 years.  And, I don’t want to lose them, so I need a backup strategy, too.  These are the steps I took to make sure they videos aren’t lost and they are actually looked at from time to time.

#1)  Create compilation videos for each trip.  We always take more videos when on vacation because those are always the more exciting times in life: more smiles, more special moments and unique settings.  I take the videos from my phone, Jessica’s phone and the GoPro and compile into one video.  Then, discard of the original footage.  Maybe I’m shooting myself in the foot because I’m going to wish I had the original file, but I really don’t see how it’s that bad of a plan.  I figure that it is likely that I’ll want to create a multi-year compilation, and I’ll be able to do that just without the sound.  Most of the compilation videos I create either have the footage audio taken out or set fairly low compared to the music playing over the entire video.

I do also create a compilation video once per year.  I take the videos on both of our iPhones and compile into one video with music.  It’s nothing fancy nor in any special order other than chronological.

#2)  Save a copy of the compilation video somewhere else.  I pay the $2/month or $24/year for 100 GB of storage on Google Drive.  I strongly dislike recurring expenses, but this one is worth it.  I think I might be paying a premium for using the cloud vs a $55 1 TB external hard drive commonly found on Amazon, but I like that I can access it anywhere in the world.  Also, I think my data is more likely to survive on Google’s server than in our house.  I think; I’m kind of second guessing my data storage strategy right now, but that’s not the point.  My point is that the compilation video just needs to be backed up somewhere.

#3) Upload the video somewhere your friends and family can see it.  What’s the point of having this video that you’re proud of and want to share but has limited ways to do that?  I was saving the videos to Google drive for a year or so.  I could play the video from my phone, which worked ok, although it could easily take 30 sec to 1 min for the video to buffer enough to play.  For the last 6 months I’ve been using Youtube where the videos are “unlisted”, and I am very happy with that strategy.  First, the videos load quickly on my phone and computer.  Not sure why, but they do.  Second, I can easily stream the video to our Amazon Fire TV at home and Amazon Fire Stick when we are traveling as well as other people’s smart TVs and Apple TVs.  I like to bring the Fire stick with us to grandma’s house to share our family videos.  Third, the videos are easy to share with people you know and not with those you don’t.  Youtube gives a link that you can copy/paste; only those with the link can view the video.

As time goes on, we will have a video for each trip and once per year.  That’s roughly 6 trips per year, so 7 videos per year.  Yes, that’s a lot, but named appropriately (“16_12 Belize” for Belize in Dec 2016), they should stay in order and in somewhat of a manageable quantity.  At least there’s not 100’s of individual videos that you’ll probably never watch.

Note for iPhone users on my love/hate relationship with Apple: when my photostream is working correctly, I love that the photos and videos that I take are 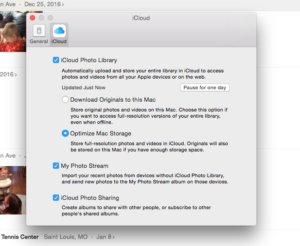 readily available in iMovie.  However, I have spent hours trying to get photos and videos from my phone to upload to my Photostream.  Result: I found that I had an issue where Photos on my Mac didn’t have the first box checked (see pic).  I found this out after day after day of trying tip after tip from the internet.  From everything I read that box really shouldn’t have to be checked, but it did.  In order to check it, I had to have 55 GB available in my iCloud because it was going to upload every photo and video on my Mac to the iCloud.  I finally splurged and paid for the 200 GB plan even though that was way more than I needed.  After about a week of files uploading (and still nothing downloading from my Photostream), the last file was uploaded to iCloud and my entire Photostream was downloaded in about 1 min.  To make it even more frustrating, the size of my iCloud storage ended up being about 30 GB, plenty of room for me to downgrade back down to the 50GB plan.  Anyway, sorry for the boring story, but it’s all I could think about for a week or two trying to get it figured out.  I was excited to create our Belize Dec 2016 video.

I would love to hear pointers on better ways to store and share videos!  Let’s hear about it in the comments section.